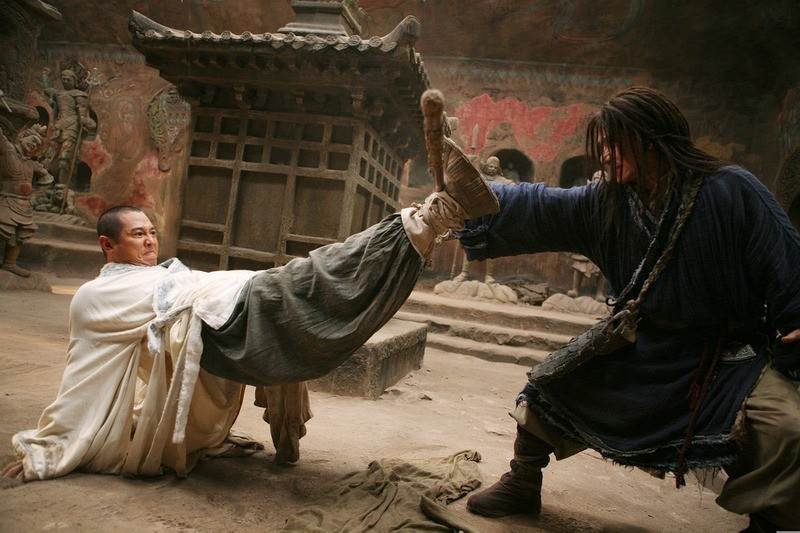 The workout we have come up with today to post is the Jet Li Workout! This one is inspired by the physique that Jet Li has built and maintained during his career. Don’t forget that nutrition plays an important role when striving to achieve various fitness and strength goals!

When we are researching workouts for different anime characters, celebrities, cartoon characters, athletes, politicians, etc… We go through a fairly large deep dive into the data we can find available through books, movies, comic books, interviews, articles that have been written, and we often even reach out to contact the individuals to gather data if at all possible. Then using our education and knowledge we formulate workout information based on what the research and outreach information obtained.

I’m going to build you a calisthenics program that you can follow 3-5 days per week, and then I will also be sharing his self-defense and training secrets below as well.

Depending on what you’re going to do with your other programming, this below is a basic calisthenics workout with a full list of sets and reps so that you can break it down however you would like.

You can do these in any number of sets, or even split it up throughout the day, as long as you finish the overall rep count.

This next section is being shared from the Men’s Health interview with Jet Li cited above.

THE TRAINING SECRETS OF JET LI

Training Secret #1 Go for explosive. For cardiovascular fitness, Li runs and bikes. But to maintain the speed and explosiveness that he’s become famous for? “Badminton,” he says. Yes, badminton-smacking the shuttlecock around for an hour three times a week is enough to keep his muscles poised. For yourself, try the more American rackets of tennis, squash, and racquetball-which won’t hurt your hand-eye coordination, either.

Training Secret #2 Think happy. Much has been made of exercise as a stress reliever, but Li believes the workout is that much more beneficial if you have a handle on the stress before you start sweating. “During training you need to think about happy things,” he says. “If you’re angry, then you’re like, ‘Grrr,’ ” and he bunches up as if bound by chains. “I can guarantee the bad energy inside is bothering you. Even if you train for 2 hours, it will still be bothering you for the other 22.”

Training Secret #3 Accept that meditation is not girly. Of all his conditioning techniques, Li prefers meditation over any other, and practices it at least an hour a day. (He’s gone as long as 14 hours.) Li insists that his mental stretching directly affects his body-which he needs to stretch for only 15 minutes afterward. “After you meditate, the inside is already limber,” he says. “So it’s easy to stretch the outside.” Try brief meditations-5 minutes to start, then increase. And give it an honest try. You might be surprised.

When it comes to self-defense, Li, as you might imagine, also has a few moves. But moves are only the beginning. . . .

THE SELF-DEFENSE SECRETS OF JET LI

Self-Defense Secret #1 Keep it simple. Too many guys watching too many movies worry too much about fighting style, says Li. He fell into the same trap. “As I grew up, I tried to create my own style, like Bruce Lee had his.” But now, “I try to have no style. If you think about style first, you still have much to learn. Just be natural.” He points to his water glass. “If I’m thirsty, I pick up the water, I drink it.” He does this and offers a sly smile. “Same thing in martial arts.”

Self-Defense Secret #2 Watch the Discovery Channel. To develop a heart that’s strong enough to stare a man out of attacking him, Li watches nature documentaries. Quite literally, crouching tigers. “That feeling, you stand there, you already have the power.” His voice is soft and his body taut as he imitates the poised beast-and at that moment, across the table, I finally receive the trademark Jet Li death stare. “A lot of people are afraid of you; you can feel it. That is completely from your energy inside. Watch the tiger. They’re scarier before they catch their prey.”

Self-Defense Secret #3 Change speeds. “We Asian people are not very tall and don’t have big muscles like American guys,” says Li, without a hint of shame. “So we’re conditioned to make people believe we can fight. To do that, you need training in speed, between the slow and the fast. That’s the tricky part. I know I can’t move the big people. But if I go slow first . . . ” Li’s hands inch up from his sides, ” . . . then POW, very fast!” and he snake-strikes the air across from me. “Very slow, very fast!” he demonstrates again. Then smiles. “I win.”

We can’t turn you into Jet Li overnight (suddenly becoming Chinese would probably be the easiest part), but we can offer a primer on wushu, his fighting curriculum. Daphne Curtis, cofounder of the U.S. Wushu Union, shows us a few good moves.

FRONT PUNCH
Strike with closed fist, rotating the forearm as you extend. This allows the musculature of the arm to direct the maximum possible force, says Curtis. The striking area of the fist is concentrated on the large knuckles of the index and middle fingers.

The Secret: “Powerful hand strikes rely on relaxation and proper body alignment,” says Curtis. If you relax the muscles in your arm until the instant of impact, you increase fist speed, since there’s less tension working against the muscles delivering the blow. Proper alignment is just good physics: If your body isn’t behind the punch, it won’t have as much force.

FRONT SPRING KICK
Raise the leg with bent knee toward the target, then snap the lower leg out to strike with the front part of the foot. Practice low and high kicks, from the target’s ankle up to his face.

PALM BLOCK
Use the palm of the hand to redirect an attack. This block can be used upward, downward, or to either side, and anywhere within your reach.

The Secret: Think detour, not full stop. “Imagine that instead of stopping the punch or kick, you must move it to the side a little as it’s coming toward you,” says Curtis. This requires very little force to achieve and can leave your opponent open to a counterstrike.

ACHIEVING FITNESS RESULTS JUST GOT WAY EASIER.
The Unorthodox Training Fitness Program Membership is a simplified process that is easy to learn and adapt as part of your daily routine. Our new one-of-a-kind fitness program provides you with a simplified approach guides you with every step of your fitness journey so you can confidently achieve your fitness goals in less time! Get more training, tools, and resources to help guide you towards achieving your health and fitness goals!

Disclaimer:
The information discussed in this article is meant solely for educational reasons. This is not medical advice because I am not a doctor. This post is based on my personal experiences and my readings of the existing scientific literature. Only healthy adults should follow the advice and ideas in this article. You should get the advice of your doctor before implementing any of the suggestions in this article. Consult your doctor if you have any health difficulties or pre-existing conditions before making any changes based on the advice in this article. As a disclaimer, the author/owner of this website makes no representations as to whether the material contained there will actually cause any harm or liability, real or perceived, and as such should not be held responsible as you are assuming any risks yourself.

Please log in again. The login page will open in a new tab. After logging in you can close it and return to this page.